Norway is a country of raw beauty and dramatic landscapes so it’s perhaps not a surprise to learn that one of the most remarkable natural phenomena occurs there. Dubbed as the land of the midnight sun, Norway is one of the very few locations where sunset merges into sunrise, with no darkness in between.

The midnight sun only occurs at certain times of the year and is only visible very close to the Arctic. Norway is ideally placed to experience this eerie yet captivating sight.

But what exactly is the midnight sun and why does it occur? And where in Norway can you see it? We’ve got the answer to all these questions, and more.

What is the midnight sun?

In the simplest terms, it is exactly what it sounds like: the sun appearing at midnight. In the middle of the night when the sky is normally a velvety blanket of darkness, the sun can clearly still be seen.

As you move away from the Arctic, the strength of the midnight sun begins to weaken too. At the pole, the midnight sun will shine as brightly as if it were noon. In Norway, the sunlight is dappled, more like the early evening before gradually brightening again for the following day. Therefore, although there’s no distinction between one day and the next and it remains light, there is a visible change in the brightness. 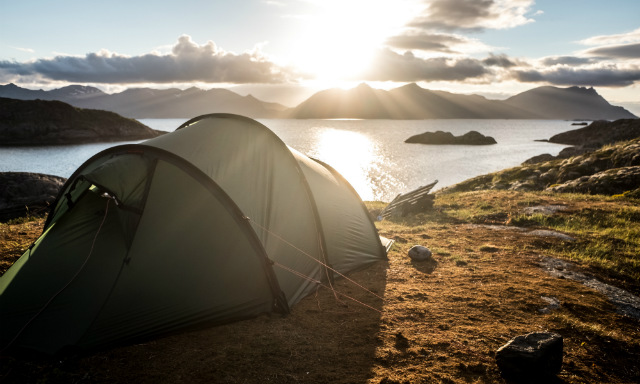 Why does the midnight sun occur?

In Nordkapp, the sun shines for 1800 hours without interruption - a total of 75 days. This phenomenon occurs every year as it’s not due to some strange aberration, but due to the physics of the Earth and the sun.

The Earth rotates completely every 24 hours, and it’s this movement that creates night and day. However, the length of daytime and night-time hours is not equal and this is because the Earth is tilted on its axis by 23.4 degrees. If it were completely perpendicular there would be a fixed night and day of 12 hours each.

In addition to the earth rotating around on its own axis, it’s also circling the sun. This orbit takes one year to complete. As it moves around the sun, the tilted axis means that at times part of the Earth will be closer to the sun than others. It’s also why summer occurs at different times of the year in the north and south hemispheres.

During the summer months when the hemisphere is tilted towards the sun, the poles experience sunlight for the full 24 hours. The further away from the pole you travel, the more diluted the effect of the sun becomes. This is why European countries which aren’t as northerly as Norway never get to experience the golden night-times of the midnight sun.

As the Earth continues on its orbit and the tilt of the hemisphere gradually moves away from the sun, the darkness of night slowly returns. During the winter season, the exact opposite of the midnight sun occurs, with polar nights. During polar nights the sun never rises fully, bathing the landscape in a bluish light, similar to twilight, during the daytime.

Where to see the midnight sun in Norway?

Whether you’re normally a night owl or a lark, the midnight sun is a real sight to behold. The light is almost preternatural, casting an unusual glow over the night. Whale-watching or fjord safaris undertaken under the midnight sun are an experience that you’ll never forget.

You can see the midnight sun in Northern Norway, and there are a number of locations that are renowned for offering the best of this spectacle: 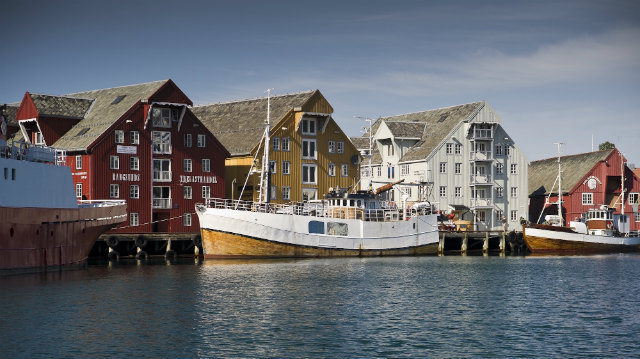 Also known for the Northern Lights, Tromsø lies in northern Norway and north of the Arctic Circle. The midnight sun appears between mid-May and late July and can easily be seen in Tromsø. For this reason, Tromsø is extremely popular for tours to see the midnight sun during the summer months. The University in Tromsø is renowned as one of the world's foremost midnight sun research centers.

The most northerly town in the world, Hammerfest offers barren coastlines and a desolate beauty that is surprisingly irresistible. The town itself is lively with a vibrant, local atmosphere, and with the rosy radiance of the midnight sun, the location feels almost enchanted.

Lofoten is located 200km to the north of the Arctic Circle, putting it in prime position to enjoy unparalleled views of the midnight sun. A stunning archipelago in the northern Atlantic Ocean, Lofoten has an unspoiled beauty that nature-lovers will adore. You can visit Lofoten on our Legendary Lofoten tour.

Take a tour in Tromsø

Enjoy an adventure in Tromsø to see the best of the midnight sun and experience the unique sight of nature surrounded by a dusky glow. Hop aboard a rib boat and discover the landscape and nature at night, illuminated by the soft, warm light.

Leaving at the harbor at 10pm and heading towards Gåsvær, there’s the opportunity to see porpoises arcing in the water along with seals, and maybe even a sea eagle gliding overhead. Even if you’ve seen these sights in daylight, there’s something extraordinary about the seascape under the midnight sun.

Gåsvær is an uninhabited island with white sand and a tiny church, providing exceptional views of the midnight sun. Explore Gåsvær while you bask in the otherworldly light before returning to Tromsø around 1am. Taking an excursion to see the midnight sun at its fullest will leave you with incredible memories to last a lifetime.

Check out all our activities in Tromsø here.

See the midnight sun in Tromsø

It’s impossible to fully convey the full splendor of the midnight sun so why not book a trip to Tromsø to see it for yourself? The gorgeous golden hues of the sun radiating in the depth of the night really is a sight to behold. When choosing a midnight sun tour with us, you can book a hotel in Tromsø in the same booking. Check out our hotels in Tromsø and book your Midnight Sun Adventure!