The History of the Flåm Railway

Norway in a nutshell® is a name that’s become synonymous with some of the most famous tours in the country – most of which include the Flåm Railway (“Flåmasbana”). Nestled deep in the heart of the mountains, this railway offers some of the most spectacular sights you’ll ever see with landscapes that will remain with you forever.

From its humble beginnings as an iron workhorse through to the popular tourist attraction it is today, Flåm Railway is a must-have experience while you’re in Norway. If this sounds as if it must be an exaggeration, consider the fact that esteemed travel journal The Lonely Planet named Flåm Railway as the “best train journey in the world”.

If you’re keen to know more about this beautiful railway, here’s a quick rundown of what the Norwegians know as the Flåmsbana from past to present.

The Flåmsbana, or Flåm Railway, cuts through the mountainside taking passengers on a magical journey through the wilds of the Norwegian countryside, providing a glimpse of the natural scenery which would otherwise be impossible to access.

Flåm Railway holds the record for being the steepest railway run on regular gauge in the world, giving the journey a real sense of drama. With 80% of the route run at a steep 5.5% gradient, and a descent of 863 meters, there’s a real sense of moving away from the hustle and bustle of everyday life.

The railway is 20km long and runs between Myrdal and Flåm, lasting approximately one hour. During the journey, you’ll be taken through no less than 20 tunnels which spiral and twist inside the mountain before emerging to the clear and fresh beauty of fjords and clean air.

It’s almost impossible to see everything along a single journey but keep your eyes peeled and you’ll spot farms dotted high up on the slopes, tumbling waterfalls and no shortage of panoramic views. More about the Flam Railway and what tours to take that include the train trip. 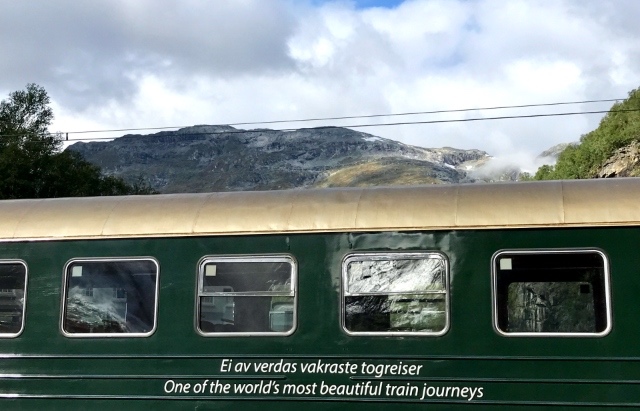 The Flåm Railway - From iron workhorse to tourist magnet

The railway as it is today took many years to develop, first emerging as an idea in 1871. It took until 1908 for the Myrdal-Flåm to be approved by the Norwegian government, with an expected 22,000 passengers per year.

Construction for the railway didn’t get started until 1924, at which time 18 of the tunnels had to be painstakingly carved out of the mountainside. Every metre of tunnel took approximately a month of hard work. With a total of 5691 meters of tunnel to be created, it’s hardly a surprise that the construction took so many years.

In 1940 the railway was finally complete and the first steam locomotives were sent trundling along the tracks, despite the impending war. Passengers enjoyed their first journeys in 1941 after extra brakes were installed.

Three years later the Flåm Railway was electrified but due to various complications due to the hostilities, electric locomotives didn’t start running until 1947.

By 1953, 115,000 passengers were traveling on the railway every year. A decade later this had increased to 175,000. Over the years visitors from home and abroad flocked to experience the train journey, with almost 800,000 passengers per year 2015.

Today, the railway has undergone a number of updates including the installation of computerized commentary and LCD screens bringing together the very best of technology and history in one perfect package.

A trip along the Myrdal-Flåm Railway can be combined with many other activities in the area, offered by Fjord Tours. With trips ranging from the peaceful and relaxing to exhilarating and active, the fjords of Norway has something for everyone. See all our Norway in a nutshell® tours.